It’s hard to figure out if you’re buying a good quality overlocker (aka. serger) when shopping online.

And what exactly makes an overlocker better quality and longer-lasting than others anyway?

I interviewed 5 technicians and overlocker salespeople to find out what a good quality overlocker is.

In this article you will learn:

It’s worth saying that you might not see any difference in the stitch quality between low-end and high-end overlockers.

This article is aimed at people who sew a lot and want a durable, longer-lasting overlocker.

If you know you’ll only use yours every now and then, a budget one will normally be good enough.

PS. I have another useful article on how to choose a serger or overlocker. This one focuses more on what features you should look for.

So what is a good quality overlocker?

Good cleaning and maintenance will make a difference to how long it lasts too.

A salesperson gave me a ball-park estimate that poorer quality, budget overlockers might only have a lifespan of 4 to 6 years (depending on usage too of course).

A better quality overlocker has a strong metal chassis (a chassis is the supporting frame of a structure).

This is what the moving loopers and knife are attached to, so the sturdier it is the better.

A salesperson mentioned that an overlocker’s weight is a good clue. The heavier it is, the more chance its chassis is bigger and stronger.

Better machines also have more gearing and linkages made from metal, not plastic.

Are most overlockers made with a metal frame?

However, the technician said that just because a machine is built with a metal frame, it doesn’t automatically mean it’s good quality…

The quality of the metal used matters.

Cheap metals have all sorts of different alloys mixed in, making it less strong.

A technician told me about a machine where he could bend the internal metal parts with just his hands!

If an overlocker is made using cheap metal, the parts will wear out quicker and the screws will become stripped (a stripped screw is a screw whose head is damaged, making it difficult to remove with a screwdriver).

Once the machine has worn out it probably won’t be worth the cost of repairing it.

“When you take a cheap machine in for a repair, we don’t have much to work with. Sometimes we will tell you it isn’t worth the cost of having it repaired, because we CAN fix it, but it won’t STAY fixed.”

The motor is what makes the knife, needles, and loopers move.

A motor with more power will make the overlocker run better and stitch thicker fabrics better.

However, a technician told me that even though domestic overlockers are getting better motors these days, they still have limited wattage (power).

A salesperson said that I should expect a budget version to have a less powerful motor.

How strict manufacturers are when it comes to quality control matters.

Factories that are mass-manufacturing lots of budget overlockers are more likely to tolerate mistakes and inaccuracies.

It’s OK to them if the parts don’t fit together tightly.

It’s OK if the metal doesn’t meet a certain standard.

All of these compromises add up to create a poorer quality product.

“You know, if you buy a cheap serger from a box store, you will be very frustrated. So don’t! What is the difference? ‘Tolerance.’

When a machine is manufactured, the manufacturer sets a tolerance level.

‘Low tolerance,’ means they don’t tolerate any sloppiness in the manufacturing process. A ‘low tolerance’ factory will make a quality machine. The metal has to meet a certain quality. The parts have to fit together tightly, without any ‘play.’

You can detect a serger that’s made in a ‘high tolerance’ factory (where they allow sloppiness), by grabbing the needle bar and see if it will wiggle forward and backward. If it wiggles forward and backward, we can’t set the needle/looper distance (a timing setting), because it’s variable.”

Clean regularly, including the needle plate on occasion

One salesperson mentioned a customer’s overlocker whose feed dogs broke after just 6 months!

The owner was sewing a lot with towel/face wipe materials but wasn’t cleaning her overlocker enough, especially under the needle plate.

There was so much waste under the needle plate that the feed dogs broke under the pressure.

“I worked on this serger a couple days ago. The woman says she sews on flannel every day.

If you’ll look closely at the needle plate, you can see that the center support is broken out and pokes up in the front. And the support between the pins is broken and pushed down.

The cause of the break is the amount of lint that’s packed into the feed dogs. WOW! That’s a lot of lint!”

A technician told me about a customer who had caused expensive damage to their machine (£300’s worth) because they hadn’t oiled it in certain areas for a long time.

Some areas can’t be oiled unless you take the machine apart. That’s why getting your machine serviced is important. The technician will be able to clean and oil those hidden parts.

The technician I spoke to stressed how important regular servicing is. Technicians will pick up on potential problems early on, protecting your machine from long-term damage.

“Regular servicing removes built-up fluff and lint to keep your overlocker running smoothly, and we recommend that if you sew once a week, you should get any machine serviced once a year…”

“…if you sew once a month, then every two years, and if you sew every day (lucky you!) then once every six months.”

Not using your overlocker enough can cause damage

“If you want longevity out of your overlocker, you need to take it out of the cupboard and give it a run!

Overlockers don’t like being cooped up and standing still, with lack of use being one of the biggest causes of irreparable damage to these otherwise sturdy mechanical machines.

When you pack up your overlocker and pop it away, over a long period of not being used, the lubricants of the moving parts can dry, harden, or [allow] corrosion.

This then seizes the mechanisms of the overlocker, and when you next want to quickly stitch an edge, you’ll find the flywheel seized so tightly that you can’t turn it.

No need to panic yet – often Mike can rescue your overlocker, but sadly, sometimes it can’t be saved.

A good way to avoid this is to give you overlocker a run every now and then – just for a couple of minutes, to get the parts and the lubricants moving.“

Did the specialists mention any good/bad brands?

Heads up: the specialists are talking about overlockers sold in the UK. It’s possible that the same brands manufacture differently in other countries.

One technician praised the following brands and said you’ll get a nice machine from them:

He said you can get a more substantial machine for about £300+.

A salesperson added Babylock, calling it well built and that it’s the “rolls royce” of overlockers.

** September 2020 update: prices have been artificially inflated during the pandemic. Better built machines will now be above £400.

Brands with a bad reputation

A technician had strong criticisms for Singer, saying the machines were not well built.

He has had to return Singer machines to customers before saying it’s not worth repairing.

He also grouped supermarket overlockers in this category.

Another salesperson I interviewed mentioned the same brand. She said her companies technician had criticised Singer for making poorer quality machines.

One detail I managed to get from her was that the metals used inside aren’t great. They aren’t finished well and smooth like they should be.

She also warned that some customers fall for the “heavy duty” names Singer give their machines, believing they’re almost like industrial machines. She doesn’t agree the machine lives up to this expectation.

A third warning about Singer came from the dealer GUR Sewing Superstore:

“Stay away from the new Singers, although the old ones (30 years or older) are still excellent workhorse machines.”

Are some overlockers better for everyday use?

One salesperson said that technically you can use any domestic overlocker heavily, but with the understanding that eventually it will fail and need to be replaced.

Well, it’s because domestic machines aren’t designed for that type of usage.

That’s the point of industrial machines. They are stronger and more powerful than domestics. They’re the tools of factories; they can handle hours of daily use.

Are some overlockers better for thick fabrics?

A technician said it depends on the quality of the machine, the feed system and how the knives are made.

Domestic overlockers should be fine for 3 or 4 layers of fabric.

If you need more than that and plan to sew very thick fabrics often, a domestic machine might not be the right choice.

You’ll need more power to cope with the demands of thick materials.

This isn’t something domestic machines are really meant for.

Their motors, even though they’re getting better and better these days, still have limited wattage (power).

You should be looking at industrial machines instead, the technician said.

They have the power to cope. You’ll wear out a domestic machine with that kind of use.

You can install angled knives on industrial overlockers. These go through the material much better than straight knives. The technician said the difference in performance can be huge.

These can’t be put into domestic overlockers.

Make sure you’re using the correct needles for thicker fabrics.

If you struggle with needles breaking when overlocking thick materials, you might be using the wrong needle size.

Or are you still feeling lost in your search for one?

Either way, let me know by leaving a comment below.

This site uses Akismet to reduce spam. Learn how your comment data is processed. 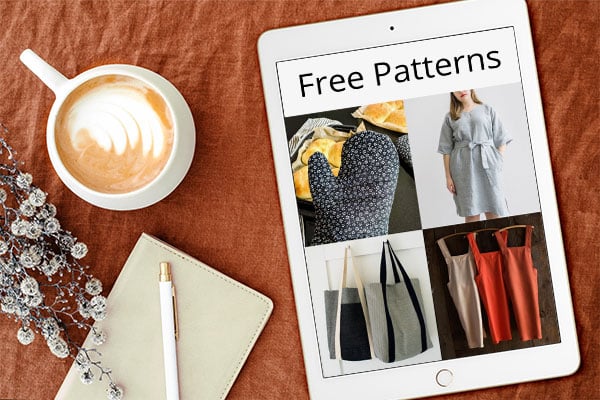 give me free patterns